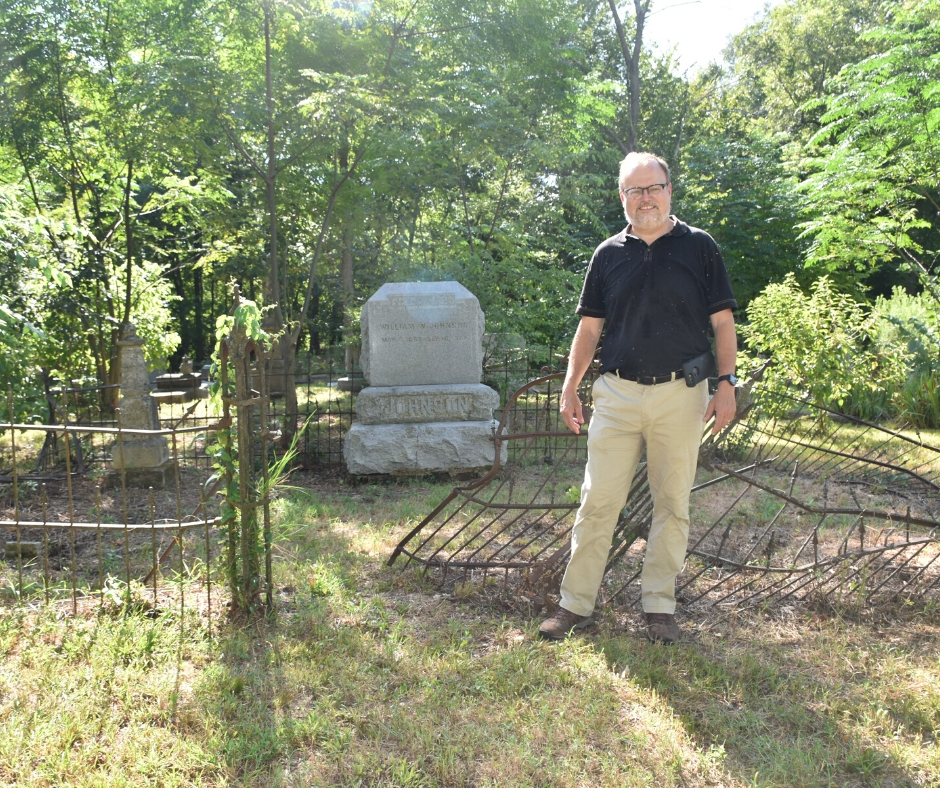 Historic Cemeteries in My Hometown

Typically I reserve this space for a feature on one of the many courthouses I visit throughout the state, but a recent visit to my hometown of Columbus reminded me of summer days spent with “city cousins” where we would show off some of our town’s more unique haunts, specifically the ancient Caddo Indian Mounds which were converted into a cemetery for the earliest settlers of this area. I was recently reminded of these summer memories when visiting with the newly formed Historic Mound Prairie Cemetery Preservation Society. I've been invited to join with this group of dedicated volunteers committed to preserving some of Hempstead County's past.

‍
Now for those of you unfamiliar with Columbus, it’s in Hempstead County in the Southwest corner of the state, just a hop skip and a jump to the Texas or Louisiana borders. According to the Arkansas Archeology Survey, throughout this part of south the Caddo had subdivided into multiple communities living independently but sharing similar languages and customs. Another shared element were earthen platforms or mounds which modern day archeologists suspect were used as places of worship. The Encyclopedia of Arkansas says, “Early Spanish and French explorers traded with the Indians, and it is possible that Hernando de Soto’s 1539–1542 expedition visited this area. Archaeologists have found evidence of Caddo Indian villages and mounds. The Caddo were known to hunt along the Red River on the county’s western boundary. They and other tribes signed treaties giving up their Arkansas lands before it became a state in 1836.” ‍

“The Mounds,” as they are called in these parts, can be described as clearly man-made and set apart from the pasture land about 100 yards from one another. When the first settlers came to this area, they began using these Mounds as their burial place for their families. The first documented European settler buried on the Mounds was Edwin Johnson, Jr., better known as Ned to his family, who died on November 11, 1838. To put that into perspective, Hempstead County was established in 1818 and around 1840 the population of this county was reaching close to 5,000.

Now as a kid I always wondered about ole Ned. Why did his family decide to bury him on the mound? Well in 2013, the Mound Cemetery was listed on the National Register of Historic Places which provided some insight into the Johnson family:
‍

‍In the 1830s Ned acquired a contract with the federal government to supply the Choctaw Indians with food and other provisions during Removal over the Southwest Trail. This added significantly to the family wealth. Ned was also a cotton planter and a merchant, operating a store out of his home.

Before his death in 1838 Ned made plans to build a larger home on top of the flat-topped Small Mound. It was not accomplished before his death and it was used as a cemetery for the family. Ned’s grave was the first to be placed on the Big Mound and he is buried in a box tomb like his father’s. The box is built of brick and the ledger on top has coved edges.

The old headstones and markers are absolutely beautiful. The Johnson, Stuart, Walker, and Cheatham families all have many settlers buried on these two Mounds including one Revolutionary War veteran. You can imagine the excitement and adventure of a little boy getting to go on a Sunday afternoon to an ancient Indian Mound. It was like going to a park when I was a child.

Now, there’s a second cemetery in my hometown that is so old that I have only been to it once or twice. It is called the 16th Section Cemetery. Most of its headstones have been knocked over by cattle and trees and are assumed to be underneath the ground. What I do remember are the two handmade “violin” shaped markers carved from the wood of a bois d’arc tree. They are for Colonel Abraham Stuart and his wife, Mary Kuykendall Stuart. They were buried in 1836 and 1835.

Hempstead county has long struggled with their Native American past and there’s a part of me that has always feet a bit uneasy about the Europeans using what was once sacred ground to the American Indians and turning it into the hallowed burial places of their ancestors. It’s an intertwined history that is often unfair but I’m proud to say that a new generation is committed to honoring the shared history of our past, no matter how painful it can be at times. When I received a call from some distant cousins asking me to come and tour these cemeteries and serve on the Historic Mound Prairie Cemetery Preservation Society I was greatly intrigued. This was a unique opportunity to story our history and preserve it for the future.

We have a lot of work ahead of us. Unfortunately, time and neglect has allowed these two Mounds to become overgrown. That’s no tribute to the hands who built the mounds or the European settlers who called this place home. But, we’re going to try to preserve the Mounds and the 16th Section burial place. We had a meeting at Old Washington recently to create a ten year plan. I am looking forward to digging in deeper, literally and figuratively in this instance, to help get these cemeteries into places that are well kept. I’ll be sure to update you all along the way on our social media channels about our progress.