Jim Jackson, Lead Attorney at the Jackson Law Firm, is an highly awarded trial lawyer who has recovered
more than $45 Million in verdicts and settlements for his clients. 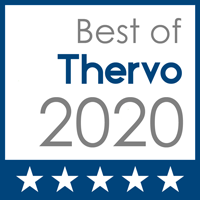 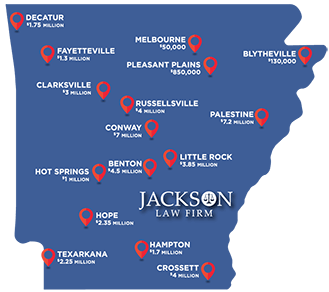 Jim settled a case involving the rollover of a Ford 15-passenger van. This van has been the subject of warning notices published by NHTSA and other federal government agencies. Jackson reached a settlement for the nine plaintiffs and two estates that he was representing on the eve of trial. The amount of the settlement was confidential. Settlement negotiations did not begin until numerous depositions were conducted and the trial court had ruled on all pending motions. Jim had to conduct depositions across the country to get the case ready for trial, and as a result of his work and preparation, the parties were able to resolve the case prior to a jury being chosen.

Jim, an experienced products liability litigator, has successfully represented clients who were injured due to the notorious defective ATX tires manufactured by Firestone. These cases were transferred to a multi-district litigation. Jim’s determination in conducting depositions of key witnesses forced Firestone to enter into settlement negotiations with Jim’s clients.

The United States Court of Appeals for the Eighth Circuit affirmed a $3.3 million judgment in favor of Stephanie, Lauren and Emily Manus of Benton, Ark., in their lawsuit resulting from the crash of American Airlines Flight 1420 in Little Rock, Ark. This is the only passenger case related to the crash of American Airlines Flight 1420 that was successfully tried to verdict and affirmed on appeal. Jim Jackson, alongside Mike Slack of Slack and Davis, represented the Manus Family in a five-day jury trial. The trial took place in the U.S. District Court in Little Rock. The Manus Family and all victims of American Airlines Flight 1420 faced a horrific nightmare that awful night and suffered even further during this litigation,” Jim said.
‍
In its Jan. 9 opinion, the court affirmed the damages awarded to the Manus family, noting that, “American did not contest its liability for compensatory damages, leaving only the amount to be determined by the jury.”The Court of Appeals also commented, “It was for the jury to determine the amount that it felt would adequately compensate Stephanie and her daughters for the terror they experienced during and immediately after the crash itself, as well as for the post-crash trauma they have suffered and will continue to suffer. Although the amounts awarded may well represent the outer limit of that supported by the evidence, we cannot say that the experienced district court abused its discretion by ruling that the verdicts were not excessive as a matter of law. 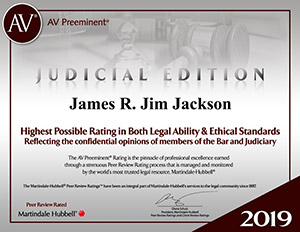 Jim Jackson is part of the exclusive Top 100 Trial Lawyers as named by the American Trial Lawyers Association. Membership is obtained through special invitation and is extended only to those attorneys who exemplify superior qualifications, leadership, reputation, influence, stature, and profile as trial lawyers, both civil plaintiff and criminal defense.Members are chosen by the organization’s Executive Committee based on reputation among peers and the judiciary, jury verdicts, previous years achievements, settlement research, nominations from state and federal judges, leadership and membership in national and state trial lawyer organizations, and rankings and ratings of the attorney by established organizations.

Jim Jackson of the Jackson Law Firm was again named a Mid-South Super Lawyer for the thirteenth consecutive year by Law & Politics magazine, a distinction awarded to only 5 percent of attorneys in Arkansas, Mississippi and Tennessee.Super Lawyers is an annual listing of lawyers who have attained a high degree of peer recognition and professional achievement. Attorneys are selected through a multi-step selection process that takes approximately nine months to complete. This process begins with a survey to all lawyers in the state who have been in practice for at least five years. In addition to the survey, Law & Politics researches credentials of nominees, assembles a blue-ribbon review panel of leading attorneys from each of the 60 practice areas included in the evaluation, directly contacts lawyers and law firm representatives, verifies data, and conducts a good-standing review of candidates. Super Lawyers is published annually in December in Memphis magazine and in Mid-South Super Lawyers magazine as well as several other publications, including The New York Times.

In your time of need, I am there for you.
- Jim Jackson, Personal Injury Attorney
Get in touchLearn more

Words cannot describe how relieved we have been

My experience with Jackson Law Firm was absolutely phenomenal.

My experience with Jackson Law Firm was absolutely phenomenal. He works very hard to get you everything you deserve and more. Thank you Jim for all you have done for me!