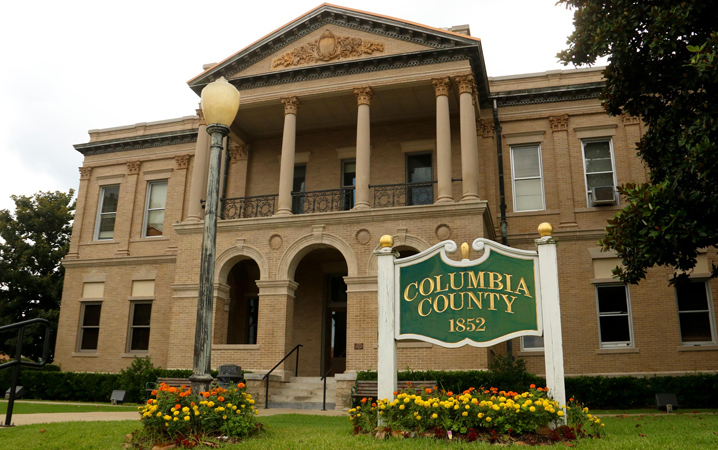 PFC Due W. Turner at the Columbia County Courthouse

After reading last months newsletter, my friend, Richard Watts, reached out to me about the story of a nearly-forgotten hero from Columbia County named Due W. Turner. Turner was a member of the all African American 333rd Field Artillary Division. Like many African American Regiments during WWII, the 333rd was often given the worst assignments, the last of which ended his life. Along with another division, the 333rd was given the impossible task of covering the allied retreat during the infamous Battle of the Bulge.

Despite the fact that the National Archives had Turner listed as a native of Columbia County, and the Honor List of Dead from WWII shows him to have been from that county, his name did not appear on the Veterans Memorial at the courthouse in Magnolia for almost 60 years.

Richard sent Due’s story to Paul Greenberg of the Arkansas Democrat Gazette who wrote a story in 2014. Also in 2014, largely in part to then efforts of Pam Ravenscraft, the Columbia County veterans service officer at the time, this was rectified, and Due W. Turners name was finally added to the memorial. Read Paul Greenberg’s original story here.

As I read this story, I learned more about the other 10 African American Men from the 333rd that died with Due Turner, and that they were known posthumously as the Wereth 11. I could not find a picture of Due Turner, but the one above may include him as it is of men from the 333 Division after they were captured. If you’d like to learn more about the Wereth 11, and the larger role of African American’s in WWII, I highly recommend this site.